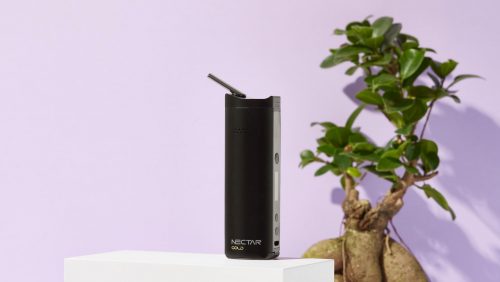 Does vaporizing weed smell more than smoking it

What is a weed vaporizer & how does it work?

A weed vaporizer is a battery powered device that is designed to heat up your cannabis to the point of where vaporization occurs, allowing you to inhale the vapor. Weed vaporizers do not combust the weed hence you receive more terpenes and cannabinoids when using a weed vaporizer. Whereas, when smoking you lose some of the cannabinoids and terpenes as combustion takes place which destroys them.

How much does a weed vaporizer smell?

Weed vaporizers vaporize weed, they don’t burn it, because of this the smell from a weed vaporizer doesn’t linger and dissipates much faster. However, when smoking joints, the weed is combusting, making the smoke heavier and much denser than vapour. This means that the smell will stay around for much longer, even in a well ventilated area.

So a few things to remember about how much a weed vaporizer smells are that:

Why do weed vaporizers smell?

Let’s remind ourselves of what weed vaporizers were designed to do; use high heat to transform weed to its aerosolized state. Meaning that all of the compounds like THC and CBD in your cannabis get heated until they become airborne. Resulting in vapour that you can inhale. Since all of the compounds of your weed get transformed into breathable vapour, there will of course be a noticeable scent.

This is because all of the compounds get heated and transformed into this vapour, including the terpenes and other compounds that give weed its aroma and scent. There is no way to create a vapour from cannabis without it smelling which is why weed vaporizers are great as they create very little smell that dissipates quickly.

Now that we’ve covered weed vaporizers, let’s just quickly go through how much smoking joints smells and why. Does smoking a joint really smell more than using a weed vaporizer?

How much does smoking joints smell?

If you aren’t familiar with what a joint is, they are also commonly known as spliffs and blunts too. They can be defined by what material is used to roll them and how much cannabis and tobacco they have. Joints are usually rolled with rolling papers.They’re filling can either be all weed or weed mixed with tobacco. Joints are usually smoked using a lighter to light them, which is what causes the weed to combust.

As smoking a joint involves combustion of the weed, it will produce a strong weed smoke odour. If you smoke a joint indoors without any ventilation for example no open window or no constant-air conditioning, it will leave the room or house smelling like stale weed smoke for days. Even if you smoke the joint next to an open window and turn a fan or air conditioning on afterwards, the smell will most likely still linger for a few or several hours before going.

Why does the smell stay after smoking?

There are a few reasons that the smell of weed stays after smoking a joint. However, the smell from smoking a joint isn’t the same as the smoke from a cigarette. First of all, because the smell of cannabis is quite strong, many people seem to assume that this means the smoke and smell will be worse than tobacco or cigarettes. This isn’t the case though, to put it into perspective, years or cigarette smoke in a house can cause both long-term and short-term damage to it. For example, long-term damage can involve removing carpets, repeating walls, deodorising and sealing. This is all mainly due to the fact that cigarettes contain chemicals, therefore making the smoke quite damaging.

However, cannabis does not contain any of these harmful chemicals, hence making its smoke less damaging. The lack of harmful chemicals in marijuana allows the smoke to dissipate within hours sometimes, which is very different to cigarettes, yet not as good as weed vaporizers. When smoking joints, the smell is usually not detectable after several hours or a day or 2 and the walls don’t get stained like they do when smoking cigarettes.

It is important to note though that the intensity of the smoke and smells produced by smoking a joint will always differ due to strains. All strains of cannabis are composed of different mixes of compounds, terpenes and chemicals. These factors have a major impact on the strength of the smell released from the weed and the joint’s smoke.

Another thing to note is that the conditions inside of a home where you’re smoking a joint can also play a large role in how long the scent and aroma of the weed will last in the airspace. If the home has poor ventilation it will restrict the in and out of air from its environment, causing stale air. It can also be potentially dangerous when a build up of odours develops within an indoor space.

So, which smells more?

It’s safe to say that smoking joints definitely smells more than using a dry herb vaporizer. The smell produced from smoking a joint is much more intense than the thin vapour that is produced from a weed vaporizer. Also, the smell from the smoke produced when smoking a joint lingers in indoor spaces much longer than the vapour from a weed vaporizer does. Vaping from a weed vaporizer indoors will only leave a smell for a couple of hours or even just several minutes if it was with open windows. Smoking joints can leave the smoke lingering for several hours or even a couple of days depending on air flow and ventilation.