Would England Have Won The Euros If They’d Taken Cannabis?

Now the dust has settled slightly, many of us Brits can add England losing to Italy on penalties in the 2020 Euros final to our collection of other national team heartbreak moments. But whatever anyone says, Southgate and the boys brought football home for yet another summer. Yes we didn’t take home the trophy, but the truth is, It’s finally exciting to be an England fan again. Bring on the Qatar World Cup! But, now the dust has indeed settled, it does leave many of us with elaborate high thoughts in our brain cortexes. Such as: would England have won the Euros if they’d taken cannabis? With much debate over weed and performance enhancing drugs at the moment, we’ve decided to take a look into cannabis and see for ourselves whether it does enhance performance, or if that claim is just another political agenda. Let’s go down a rabbit hole together. As always, strap yourselves in, let’s go.

Before we enter this rabbit hole of cannabis and whether it does or does not enhance performance, let’s first give a deserved (internet) round of applause to the England national team. Every single player on that pitch and on the bench made the Euro 2020 campaign unbelievably joyous. Whether it be the Youtube videos of the camp, the fast-attacking football they played, or the brotherhood they created, this England team is by far one of the most charismatic and talented ones that has ever existed. And hey, a first major competition final in 55 years ain’t too shabby either. In the end Italy won, they were probably the better team, but England can most definitely leave the tournament with their heads held high and with a lot of positivity for the future. It’s gonna be an exciting Qatar World Cup. It’s also hugely disappointing but not at all surprising that many have decided to take to racism after the defeat on Sunday. The PM, Boris Johnson, may now stand up in support of the likes of Rashford, Sancho and Saka – yet as Gary Neville reminded us, this is the same man who likened muslim women to letter boxes. Furthermore, the Tory government also labeled the ‘taking a knee’ before each game as ‘gesture politics’. Ultimately, it seems their supposed support is nothing short of a hollow attempt to jump on the bandwagon.

Unfortunately, racism within society is yet again proven to be deeply ingrained. Although it may only be the minority who say these hateful things, their words dig deep. Let’s hope that things can begin to change. In the words of many chanting football fans: “Southgate you’re the one. You still turn me on. Football’s coming home again (one day)”.

Performance enhancing drugs are drugs that have been identified to give unfair advantages to athletes in essentially any sport. Most drugs, over time, have been banned from use before and during sport events by the anti-doping laws. Some of the greatest athletes of all time have had their own dealings with performance enhancing drugs over the years. Maradonna, in the 1994 World Cup, was found to have Ephedrine in his blood, which supposedly increases energy and alertness. Lance Armstrong, one of the greatest cyclists of all time, admitted to Oprah Winfrey in 2013 that he’d also taken a drug which stimulates red blood cell production. But what about weed? What about our good, old friend cannabis? Well, most recently – only a month ago – the US champion sprinter Sha’Carri Richardson was forced to miss a key event at the upcoming Tokyo Olympics due to her testing positive for marijuana consumption. She was using cannabis to deal with the news that her mother had passed away. Cannabis is well-known to help with mental health issues. This reaction by the World Anti-Doping Agency has led to much outrage. Whilst performance enhancing drugs exist, and are genuinely made to benefit the athlete unfairly, it seems unlikely that weed will do much good or bad for the athlete. But let’s look deeper at this.

This is what WADA (World Anti-Doping Agency) has to say…

“The WADA Prohibited List identifies marijuana and cannabinoids as substances that are prohibited in-competition. Unless an athlete has an approved Therapeutic Use Exemption (TUE), the use of substances when they are prohibited in sport may lead to an anti-doping rule violation and sanction”.

Whilst WADA have admitted that anti-doping laws are an ever changing thing, especially as laws and research changes around different drugs and their uses, their stance on cannabis has evidently remained stagnant. So why is this? 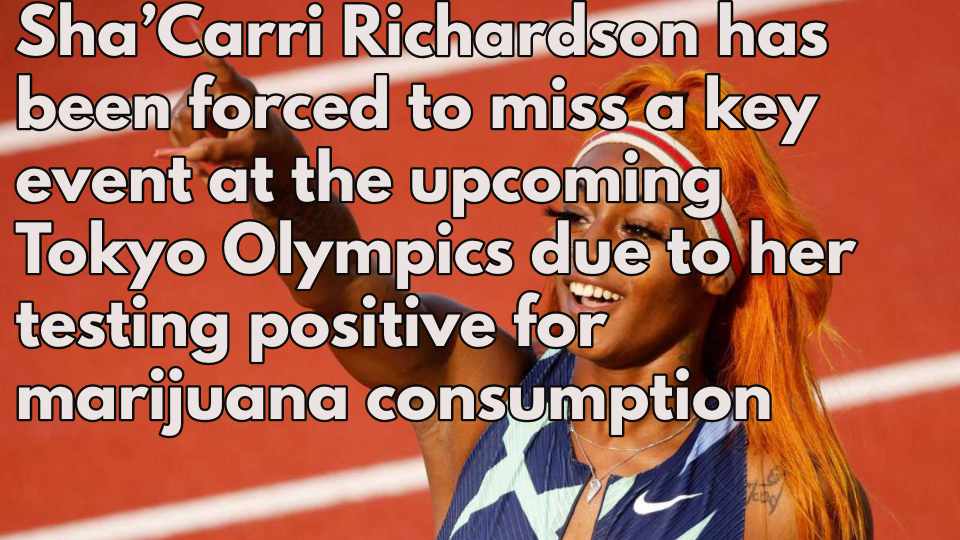 Is Weed a Performance Enhancing Drug?

So why is cannabis included in WADA’s list of drugs that can unfairly enhance performance of athletes? Well, according to them, “A drug must meet two of three specific criteria to make WADA’s list of prohibited substances. If a substance enhances performance, creates a health risk, or goes against the “spirit” of the sport, then it’s in violation”. Well, it’s probably important to note that Sha’Carri Richardson found that the use of cannabis could somewhat alleviate the pain she was feeling. It doesn’t sound like she was using it to enhance her performance, does it? But does weed enhance performance in any way?

Rather than allow this article to be a completely one-sided affair, let’s first take a look at how, perhaps, weed could be performance enhancing. Obviously England got knocked out in a penalty shoot-out, which for anyone who was born before 2018, knows that’s a pretty old tale. England have been in 10 major tournament penalty shoot-outs; losing 7 and winning 3. 2 of those victories have come since 2018, so if anything, these boys have done better than the majority of English teams. But what is it about that slow walk up to the goal, thousands of fans watching you, the weight of the nation on your shoulders, that makes the whole experience so nerve-racking? God knows. Anxiety and stress, which are most definitely rife in players taking penalties, are well-known to be quelled by the benefits of cannabis. Thus, perhaps a quick hit on a dry herb vape would help a penalty taker before that dreaded walk. It could chill them out. Although this could also be benefited from some CBD products, which are legal. The relaxation effects perhaps could be the only part of the cannabis plant that could somewhat enhance the performance. But, really, that’s not much to go off.

The Majority of Evidence Points to No

However, the majority of evidence points to weed not being performance enhancing.

An article in Pop Science recently mentioned a literature review which concluded that “weed does not act as a sport performance enhancing agent as raised by popular beliefs.” Also that “cannabis consumption prior to exercise should be avoided in order to maximize performance in sports.”. Thus, if anything, weed can work against the athlete, not benefit them. Of all the benefits marijuana can have on people’s physical and mental well-being, competitive sports may well be where the benefits stop. Although the England squad could be advised to turn to cannabis to deal with their anxiety and PTSD after losing so dramatically, using cannabis during the tournament would almost have definitely not done anything positive for them. This seems plain to see – so why are so many people still under the illusion that cannabis should remain on the WADA’s list of prohibited drugs?

Is There an Agenda Against Cannabis?

If you look back at the history of cannabis in the US and many other countries there is definitely something dodgy that comes up around the 1900s. Before the 1900s, marijuana was legal and there were no federal restrictions in lots of western countries. However, in the case of the US specifically, when there was an influx of Mexican migration in the early part of the century, the laws against cannabis began to kick in. The media stopped referring to weed as ‘cannabis’ and began to call it the Hispanic term: ‘marihuana’. They began linking the substance to minority groups like Black people and Hispanic People, and to crime, claiming it was the cause of all the country’s problems. Ever since then, minority groups have been three times more likely to be arrested for possession than white people. This means higher imprisonment for minority groups and higher fines.

Now, cut to 2021, here is a highly talented female athlete in Sha’Carri Richardson who is using cannabis to deal with her mother’s death, and yet she is being banned for a month from the Tokyo Olympics. It’s no wonder she feels that it is a race issue. The agenda isn’t against cannabis, it’s against minority groups. The unfair treatment of, in this case, black people when it comes to cannabis possession is evident and needs to be dealt with – on and off the pitch. Ultimately, sports authorities in general need to have a look at how they deal with racism – be it athletics or football or anything.

So would England have won the Euros if they’d taken cannabis? Probably not because it evidently is not a performance enhancing drug. Although it could be used to chill out the haters after the game. But win or lose – the way sports and governments deal with race issues is not good enough and needs to be improved. Until then, let’s keep calling it out when it occurs.

As always, we hope you found this article enjoyable and, most importantly, educational.

If you fancy trying to take a penalty after a weed vape hit then why not purchase one here? Let us know how it goes.